When using the Mechanics Lien Laws one must be concerned about the method or form they use to “Release their RIGHT to a Lien”. Many states have adopted PROPRIETARY LANGUAGE in the structuring of these forms and have laws which insist that these Proprietary Forms, or at the very least, the incorporation of proprietary language to be inserted into any non standard form.

Well there are those who participate in the Construction Industry who prefer to work strictly under the guidance of their council even if it means to ignore that which is set forth within the statutes.

Not to imply that any Release of Lien RIGHTS form crafted by an attorney is not compliant with the state statute. However, when additional language is added, you may run the risk of subjecting your company to conditions which have been deliberately eliminated from the language as offered with the Statute. The simple fact is that most who have special release of lien rights forms crafted, usually do so to add layers of protection of their interest or to remove any liability they may be required to accept when using State Statue structured Release of Lien Rights forms.

Here are the states which have published specific language within their lien laws, which apply to the Release of Lien RIGHTS.

Other States, while not declaring proprietary release of lien rights language or specific forms, will most generally accept the structure of the Release of Lien Rights language as represented in the above list for like situations. The most common are:

To be safe, please exercise extreme caution when signing an Unconditional Final Release. This document will declare that you have already been paid everything you earned on the referenced project. If you are still waiting for a check, wire transfer, or voucher, make sure you receive the payment and that the payment is valid before surrendering an Unconditional Final Release.

To avoid any of the confusion, or searching for the specific state release forms. CRM Lien Services offers a comprehensive Construction Notice Management Application for our Open Account clients. The CRM eSystems online service includes all of the specific state release of lien rights forms, including versions with Notary Public endorsement and a complete pallet of generic forms for those states without proprietary language requirements.
To learn more, please use the following link: 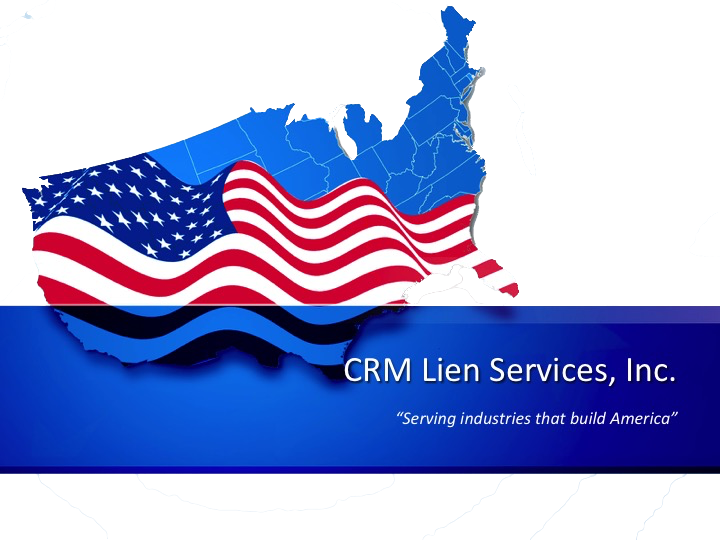 Patty Bivens
14:00 08 May 18
CentralTel has been in relationship with CRM for many years. The service is always polite, prompt, and profession! Most important, they value integrity and customer service above all. So rare today...

Jan Hill
17:21 08 May 18
CRM handles every matter with speed and accuracy! Very reliable company with knowledge of lien laws in every state.

Danny Weisinger
00:45 24 Oct 18
CRM is absolutely wonderful! We wouldn’t have been able to get our Notice of Completion without them. Janice went above + beyond by taking the time not only to help us fill out paperwork, but to walk us though the process. - Daniel, UNFOLD AGENCY.

Ryan Hammond
03:37 19 Dec 18
Great customer service! Staff is very knowledgeable about what they do!

Laura Coon
17:38 23 Oct 18
I placed a review several months back that was very negative - I learned that they were having phone problems with their phone carrier, and once I was able to speak with them they were quick to help me and provide me with the necessary information I needed. I have used them many times since the orginal review, and am changing my current review to 5 stars to reflect my renewed faith in them.

Frank Lopes
19:49 20 Apr 20
CRM is everything we hoped for and more. Even when a customer would go dark, they helped us get get paid. Over the the years, their services have helped us collect on every past due due account.
See All Reviews Write a review